One Down and Two to Go

I am finally through with my Tote Exchange purse. I started the purse on time but was sent out of town. I had planned on making polymer clay buttons for the center of the petals and embroider my pals na 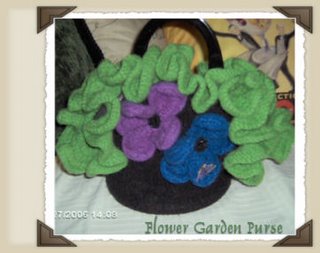 me in the lining but time was against me.

I had purchased the yarn to make myself the purse. When I joined the exchange I thought that the pattern would be great for my secret pal, Kim. I decided to use different yarn for the flowers and purchased what the lady at the yarn shop told me was "good" yarn for felting. Well, I can assure you that the yarn is "NOT" good for felting. My green trim (represents the leaves) is floppy and the flowers which was suppose to be two layers, did not felt so I only used one layer.

I was at my daughter's this week crying and getting very upset because the purse was not what I had expected after washing everything 3 times. I call it my "flower garden purse". I thought by give the purse a name, it would be something Kim will like. I put a treat inside hopefully to make her smile.

I am happy to say that I received my tote from my pal. The tote was full of such great gifts. I did get embarrassed because I was wearing what I thought was a pin she had sent me and when I thanked her, she said that she had sent stitch holders and just put them on a safety pin. I was wearing the pin (stitch holders) on my work sweatshirt because it matched.

I downloaded the picture of the purse but must have deleted it by mistake. I will show you my great purse in my next post.

I am in two other exchanges that I need to work on now. Hopefully, I can stay home long enough to get them finished.
Posted by Louise at 7:15 PM 1 comment: