This weekend, my daughter and I went to the first Gettysburg Steampunk : Film, Art & Music Festival. All I can say was it was FUN. We were told by the promoter that it has already outgrown the space. As soon as I walked in I was hooked. We ran into these two gentlemen. 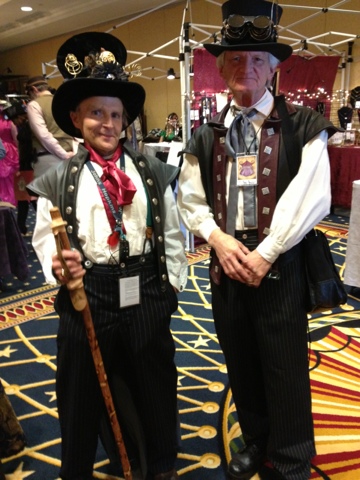 I thought that I was going to be the oldest person there and as it turned out,  I was the perfect age.  So much of the lectures and workshops overlapped so I did not get to see and do everything which was a pity.  The Festival ran from March 29 to March 31.

I really fell in love with Bartitsu: The Victorian Art of Self-Defense and took two workshops, attended a lecture and a movie about the beginning of the art.  The instructors real name is Mark P. Donnelly but he calls himself Professore di Armes.  This art was developed in England  by Edward William Barton-Wright after he spent time in Japan but we remember it from Sir Arthur Conan Doyle as the technique used by Sherlock Holmes.  The Bartitsu Club was all the rage in 1899 and only recently has this lost martial art been rediscovered. Mr. Barton-Wright summarised the essential principles of Barititus as:

Women were allowed in the Bartitsu Club but was not taught all the disciplines because it was not lady like.  When the club closed, Edith Garrud, opened her own dojo and specialized in teaching women and children the art of self defense.  She taught an elite group of women the technique which the newspaper called Amazons.  These ladies became know as "the Bodyguard."  They were sworn to protect the Suffragate  leaders during their public protest rallies, which was often violently interrupted by the police.  I am happy to say they were very effective.

What  does a gentleman of fine breeding have as he is walking down the street...a cane.  What does a lady carry....a parasol.   I attended the gentlemen's workshop entitled Fight Like Sherlock Holmes-Introductory Bartitsu taught by  Prof. Mark P Donnelly were we tried a few techniques on how to use the cane and feet to disable the attacker.  This is my daughter using a cane against the assailant.

In this workshop, he told us that men are punched and if we attended the ladies workshop entitled Kicking Ass in a Corset - Bartitsu for Ladies we would see that men  grab women. So on Saturday, we attended that workshop and found that for women, use your shoes, parasol or whatever is handy..the point was to get away.  I have some video but can't figure how to get it on Blogger, I will keep at it.

Some of the costumes. He is a mad scientist Before we left and after I brought my corset (you wear them on the outside), we attended the Bathing Beauties Costume Contest.  We did not stay to see who won because we had already picked the winner in our heads. I thought I would end with the corset that I brought for my costume that I am trying to get together in my mind before the next festival.  The one I really, really, really want to go to is in NJ,  Steampunk World's Fair. Last year there was 4,000 attendees.  I even have a name "Mistress Gift",   in German, Gift means to poison.  I thought that I would be a poisoner.  My first costume will be simple, something like this without the gun, remember...I am a poisoner.

Time to go to GStreet for fabric and leather.

I was talking to some gentlemen and I agreed with them that the reason that Steampunk is popular with older people is because we grew up with Buck Rogers, Jules Verne and others like them so we are just reliving our childhoods.

(My daughter and son-in-law)

Just got back from my last big company meeting.  It was good seeing  co-workers but I paid no attention to any of the  topics in the  meeting once we  were told that our jobs would not change in 2013.

I also went to my favorite Disney park, Epcot.  It was the Flower and Garden festival which is one of my favorite times to go, my favorite being Christmas season. In the UK section they had these large cups with tea plants in them.  They have this every year and I think they are neat. also, my favorite snack place is in France.   They have expanded it and now there is indoor seating.   Had to stop and get a Napoleon which goes by different names depending on which country you are in, no matter to me, they taste good. A little about what is going on with the RV. I received an email that the flooring came in and it was not up to standard and they sent pictures of an alternative.   To reorder it would put the RV off schedule.   I was not sure from the pictures and told my saleslady to have the other ladies look at the flooring up to the cherry cabinets and if they would put it in their home then she was to go for it.   I was told that all the ladies loved it so I will see my flooring when I pick it up. I also received the renderings for my workstation/dinette area for approval. I had some concerns that will get worked out then I will approve everything. I won't have much space to get from the driving area to the back when the slide is in but that was a trade off that I was willing to have to get my work space.  What you do not see from the rendering is that a leg drops down when table is fully extended, full storage underneath, all functioning drawers, desktop and table will be laminate, heavy duty drawer glides.

This is desk fully extended 39".  the table will stick out enough for me to eat dinner or use my laptop when it is pushed in.

This is when slide is in.

Otherwise, downsizing is going slowly.   I have been deployed (working)  for 10 days so that will slow things down.   When I get back, I will rent a truck and take the things to my son that he wants.

This is a funny story, One of the ladies in my women artist group, takes care of her aunt that has alzheimers, had to get rid of her aunts cat.   In order to not upset the aunt, she told her that the cat was ill and they had to put him to sleep, the aunt wanted to see the cat so Elaine told her that they had to cremate it.   The aunt wanted the ashes so Elaine had to get ashes from the fireplace of a friend and ordered this urn. The urn filled with fireplace ashes now sits on the aunts bedside table.

My partner in crime and my dearest friends, Collin,  while we were in Florida.  Check out the matching tee shirts and me in my McGoo glasses. I thought they looked cute until I saw me in that picture.