Before You Say I Should Not, it is too late

I know that I do not need another hobby. I hardly have time to do everything I enjoy doing. However, I went to King of Prussia, PA to take a machine felting class with Paula Scaffidi, www.fiberella.com. She is a textile artist that strives to have her students tap into personal creativity. On Saturday, 4/21, she had a lecture, demo and trunk show on how to Spark your Creativity with a Textile Sketchbook. Basically, she wanted you to just doodle in your sketchbook and then use those doodles to create textile art using free motion, quilting and machine felting. I was inspired but felt that I could never create anything close to what she was showing us.

The actual class was that afternoon and all day on Sunday. We were to bring a sweater, that fit, and we were going to make it over with machine felting. She came loaded with yarn, ribbon and roving of all colors and textures. There was no way that you could leave with out wanting more than what was in the kit that we had paid $40 for. All doing the class, she was opening her packs of yarn and telling people to take some over and above the kit. She also had silk dioponi pieces that she told us to take some of.

Okay, I will show you the sweater that I redid but first I have to explain how I came home with a Babylock Machine Embellisher. I had been looking around the area for one and the cheapest I could find was $699. I thought that was too expensive for a machine that could only felt. I have joined several Yahoo groups and just lurking had made me want one. I had decided on the Babylock because it comes with 7 needles and you can change one needle at a time. I will tell you now, you will break needles. I am also embarrassed to say that I was the first to break a needle in the class. However, before the day was over, almost everyone of us had broke at least one.

The class was held at Steve's Sew and Vac http://www.stevessewandvac.com/. It was announced that they would sell the class room machines for $349. I called my daughter and she agreed that I should buy it. I was the first one to get a red bow. The store put a red bow on all the machines that where purchased that weekend. My used classroom machine was only used by me. He opened the boxes and set the machines in front of each of us. One lady called her sister in Chicago and she brought one over the phone. Okay, here is my first embellished sweater.... 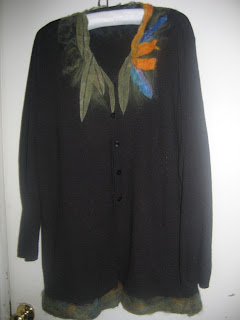 This is the front. I had wanted to make a bird of paradise flower, however I was not getting that so I just used the colors. I also combined all the colors to put a roving band around the bottom of the sweater. That was not what I planned to do but the cutting looked too much like fringe. 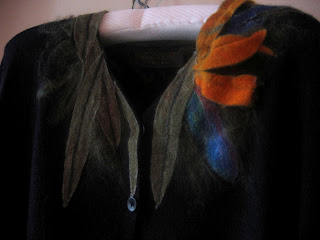 The only other thing I need to do is make a polymer clay buttons that is a leaf for the top 2 buttons that will blend in.
This is the back..I made leaves coming around the back of the neck and a feathering of the roving that was in the color of the flower thing 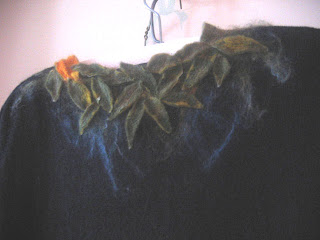 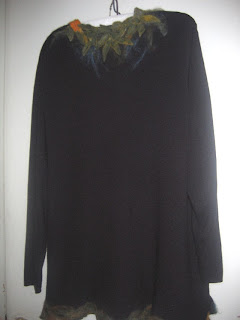 I am not sure if I will ever wear it..However, I like it.
I also had agreed to do a 8 1/2 x 11 fiber page for a Yahoo group I am in. Now that I had the Embellisher, plenty of roving and the silk dioponi, I wanted to incorporate all in my page. I used roving to make the tree, Silk dioponi for the leaves, as well as used the left over leaves from my sweater on the flower. 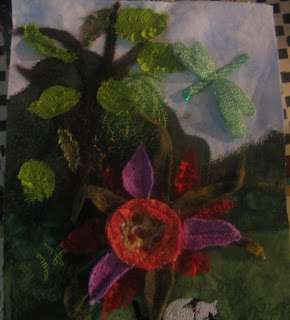 The dragonfly is Free Standing lace embroidery in 3-D.
I have to put a binding on the page tonight and get it in the mail by the weekend.
This weekend I am dying yarn. I have a maroon, teal, purple that I want to use.
Posted by Louise at 4:00 PM 2 comments:

I still can not believe that I am finished with my messenger bag. It took me forever to needle punch all those flowers.
Let's start from the beginning...I found a fabric panel showing a Paris (France) street scene. Since the panels was in the sale bin, I brought them with the idea that someday they would be curtain valances.
Fast forward to a month ago when I ran across the panels while trying to clean out some of my stash (waste of time, everything is still there). As soon as I saw the panels, I thought of a purse. I wanted a messenger bag but could not find a pattern that I liked so I just made one up. 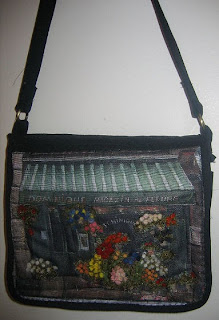 I quilted fabric for the bag so that I would not need to put in a lining. Then I started working on the front flap. I put together a layer of batting, the part of the panel that showed the flower shop, then the window screening, quilted this together. 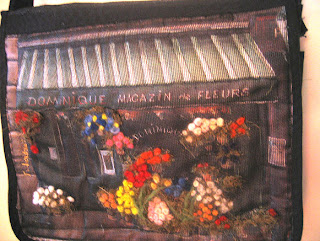 Next I pulled out my bag of roving scraps and started rolling tiny balls and then needle felting them where ever there was flowers on the panel. It felt like it took forever. Once that was all done I put on the backing, put the flap on the bag, trimmed everything with binding, put in my name label on the inside flap and the bag was finished. 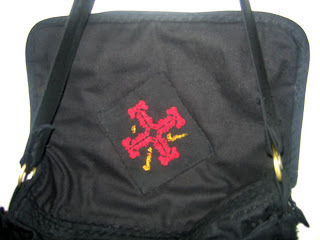 I really like it. I am sorry that I did not quilt a more colorful lining but that will be for the next one. I want to make some more messenger bags now. 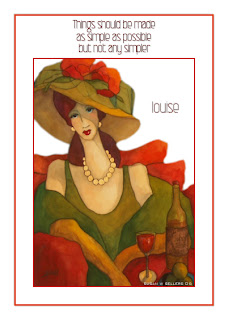 Yarn, and Yarn part I

I have not posted in a while and have lots of things to show and tell. In fact, this will be a two part post. I thought the first should be to show you what I have been spinning and my sock club yarns.
I have a Lendrum double treadle spinning wheel. It was purchased for my daughter, TeAntae, but she did not use it much. My friend, Gail, the owner of Misty Mountain Fiber Workshop in Gettysburg, PA, has been teaching me to spin. 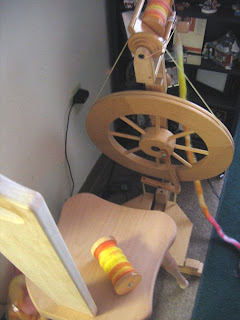 Finally getting the yarn that I was aiming for. When I go to the Maryland Sheep and Wool next month, I will pick up some superwash and start spinning my own sock yarn. For now, I will just use my spinning to knit and weave with.
I am presently knitting a scarf and hat with the beautiful "Bright" yarn I just spun 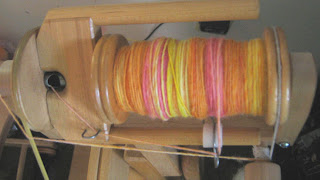 . Bright pinks, yellows, and orange. You will see me a mile away.
At present, I am spinning this gorgeous handpainted roving in shades of greens, rust and yellow for a shawl.

I had planned on weaving the shawl for my trip to Europe but was told by friends not to take anything I really love. So, I will weave my shawl but leave it here.
Finally, I joined the Socks that Rock Club and have received my first shipment. Since I plan on taking s 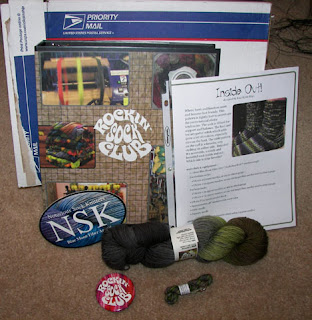 ome knitting for the plane and long bus rides, I am thinking about taking this yarn. Nice quiet colors. Have not decided if I will use the pattern. There is time to decide.
I also joined the Yarn4Socks Club and have received my first shipment. The purple yarn is mine and the blue is my daughter. I have not picked up the yarn from her yet so she sent me a picture. Very pretty color, don't you think? 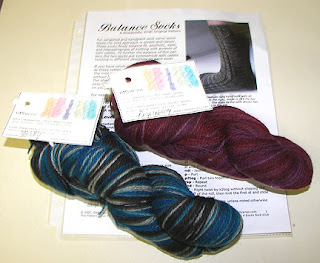 My next post will be to show you some items that I made for my exchanges, and anything else I think of. Until then.....
Hugs, Louise
Posted by Louise at 10:40 AM 4 comments: